You are at:Home»Features»The Perfect Retreat 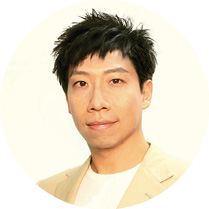 Louie Chan, Managing Editor of HK Golfer samples the delights of summer in Niseko, Hokkaido, a region renowned for worldrenowned skiing, but now one that has become a great golf destination in its own right.

This northerly island – the second largest in Japan – became a globally recognised winter sports destination with the awarding of the 1972 Winter Olympics to the capital Sapporo. This was the first time a Winter Olympics had been held outside of the USA and Europe – although Japan had previously been awarded the 1940 games that were subsequently never held. Sapporo then became a growing destination for tourists, predominantly domestic until the numbers of overseas visitors grew exponentially following the establishment of the highly regarded tour operator such as SkiJapan.com and its followers. This area, with nearly 600 inches of average annual snowfall, is officially the second snowiest resort in the world.

Golfing wise, perhaps the biggest surprise for a visitor to Hokkaido is finding that there are over 170 courses on the island, with around 10 easily reachable from a base in Niseko’s accommodation hotspot Grand Hirafu. Once largely private, the boom and bust of the late 1980s to early 1990s led to many of the courses opening to the public and prices plummeted. Whilst painful for the developers, it has made the region a golfer’s paradise. Having such a breadth of facilities available in the most sparsely populated area in the country means tee times are readily available and at bargain prices. Golf here is, of course, exclusively a summer pastime with courses open from May through October. The weather is perfect for golf at that time, and unlike elsewhere in Japan, 36 holes in a day is easily possible — although a leisurely 18 followed by a visit to the onsen (hot baths) is a delightful alternative. 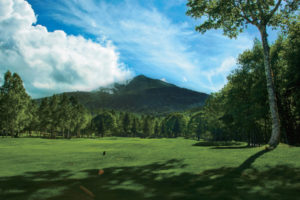 Hanazono is the best of the bunch in many ways. Great facilities, superb conditioning and memorable holes, with Mount Yotei forming a breathtaking backdrop on many of them. The wind plays an important part here and the four par-5s can make a mockery of the stroke index if the breeze is coming from an undesired direction. The 16th, in particular, is a spectacular beast when played into the breeze. The par-3s here are also a memorable feature. All four are challenging – especially the 17th, which from the elevated tees looks longer than its 201 yards. The green is narrow and a lake protects the front. With the wind straight into the player (as it was the day we played) a par here is a great result.

Rusutsu Resort River Wood
Only a 40-minute drive from Niseko, there are two superb Rusutsu golf facilities worth a visit, but be
careful not to mix the two! They feature two Curtis Strange designs – not-so-imaginatively named River and Wood – and a superb chalet-style clubhouse. The clubhouse is renowned locally for its “Genghis Khan Barbeque”, which takes place on a huge wooden deck and is cooked on a hotplate in the middle of your table. Ice-cold beer, which is poured from the taps on the deck itself, makes for a great finish to a highly enjoyable 36-hole day here. 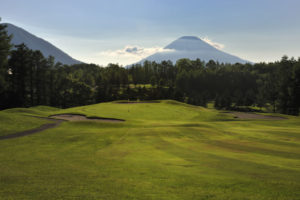 The Wood Course here is undoubtedly one of the best in the region. A more forgiving layout than the River, this is nevertheless no pushover. The picturesque second is an early wake-up call: rated handicap index one, this is a treelined monster at 454 yards; accept a bogey and move on. As with every course in this area, the scenery is breathtaking and makes it difficult to concentrate on the mundane matter of keeping the ball in play. As ever, the wind is a factor, made more challenging due to the sheer number of trees that shield its presence from the tees. Overall, a delightful combination of beauty and bother, you will want to play this again and again. 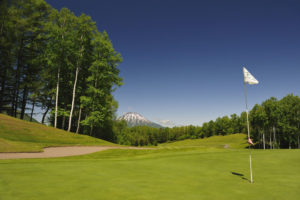 The River Course compensates for its shortness by being ill-tempered and dour if not treated with respect. Narrow fairways with steep run-offs on either side would be painful enough. That the run-offs often lead to out-of-bounds makes this a tricky track to master. As the name suggests, water plays a part on many holes and it’s best to keep the big stick in the bag and plot your way around here. This is especially true on the par-5s, which are all short enough to reach in two, but all feature narrow landing areas. Overshadowed by the elegant Wood Course, nevertheless, this is a very fun course in its own right. 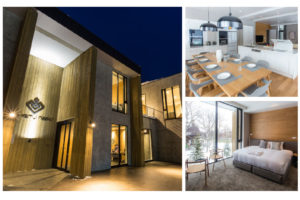 I stayed at The Kamui Niseko (www.kamui-niseko.com), a stunning new five-star accommodation opened December 2016 in Annupuri area. An exceptional premium property, thoughtfully designed to capture the essence of the beautiful natural surrounds. There is an on-site Michelin Star Sushi Restaurant, Sushi-shin (www.sushishin.jp) and the master chef. Miyakawa-san was awarded the pinnacle of excellence and recognition, three Michelin stars and offering world class Edomae Sushi.