Born and raised in Sapporo, Murata san was a big fan of sports – particularly baseball – and entertained dreams of one day becoming a professional player. When he was a teenager he gained employment at an okonomiyaki restaurant and his interests slowly shifted towards the food industry.

After graduation, he spent 2 years at an izakaya restaurant and was promoted to head cook. His commitment to pursue a career in Japanese cuisine now began to take real shape.
Opportunity knocks at the right time, and he was referred to a luxurious traditional Japanese restaurant known as Ryotei in the Lake Shikotsu area. There he learned what it takes to become a pro; techniques, cultural understandings and a strict kitchen hierarchy.

Unlike anything he had previously experienced, Ryotei meals did not utilise any processed foods – each dish was skillfully decorated using different culinary equipment – carefully selected raw fish was trimmed and sliced into sashimi. For tsuma, often served as a bed for sashimi slices, daikon was manually shredded into fine thread-like strings. It was such a shock to learn that the Ryotei chef devoted such extraordinary effort and meticulous care into the details of every dish.

Unfortunately the Ryotei eventually closed down, and so Murata san decided his next step was to explore sushi. He returned to his home town of Sapporo and worked at a sushi restaurant there.
Sushi chef was a whole new experience for him, dealing with so many different kinds of fish, as well as the new and challenging aspect of food preparation as well as simultanously engaging wtih the customers in face-to-face conversation over the counter. He watched experienced senior chefs over and over to study and emulate their skills.

There should be no language barriers if you respect each other 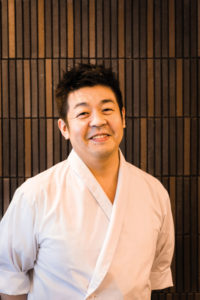 After a while he decided to make another transition, he joined a hotel’s on-site Japanese restaurant where he catered for weddings and parties – sometimes for 1,000 attendees per day. He actively sought out learning opportunities and embraced new kitchen experiences and challenges.

Now working at Yukitei Niseko, he sees it as a great opportunity to test and further expand his culinary skills. Welcoming customers from all over the world and working in a multinational environment has proven to be a rewarding surprise.

At his current position Murata san expresses gratitude to be working with such great staff.

Cook your own crispy tempura

To avoid soggy, oily tempura, ensure the batter is not sticky and the cooking temperature is not too low!

Try the delicious specialty tempura at Yukitei for yourself! Located in the Matthew Suites building.