Yumi Yoshihara, the owner of Niseko Genghis Khan restaurant grew up in Seto, Aichi Prefecture, and moved to Niseko when she was 25 years old. In Japan, it is common practice to recruit brides to marry into farming families with the hope of increasing the amount of younger farmers. Yumi came across an advertisement calling for potential brides-to-be to venture to Hokkaido, and—out of pure curiosity—she applied. A short while later, Yumi received a reply from Niseko Town. Despite initially not knowing what to expect, she still decided to relocate, and with the help of the Town hall staff, she met and married a local farmer—and remains with him to this day. “Pretty crazy right?” she added, “ I was really young and impulsive!”

Yumi lived in Niseko for over 30 years and towards the end of 2002, she founded Niseko Genghis Khan in Hirafu for the winter season; later moving to a new building in Annupuri 12 years later. Thanks to the high demand and an ever-increasing popularity amongst locals and tourists alike, it is now a year-round restaurant. Yumi relishes the summer and winter seasons in Niseko, treasuring the verdant nature and beautiful terrain, and loves the convenience of its close proximity to Otaru and Sapporo.
We sat down with Yumi and asked her about Genghis Kahn BBQ: 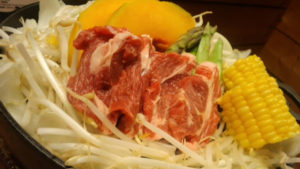 What are the characteristics of Niseko Genghis Khan?
Our meat: We serve the highest quality lamb; they are all less than one year of age, and are not bred in huge numbers. The cuts are all hand-sliced to minimize the strong flavour, allowing you to fully enjoy the taste with satisfaction. I’ve lived and worked on my husband’s farm, so I can guarantee we have the freshest and safest vegetables—potatoes, corn on the cob, onions, pumpkins, as well as rice—they all come from our own farm or our partner’s farm.

Do you make your own sauce?
We make our own special sauce using homemade recipes that were passed from the previous owner. We also use different kinds of soy sauce and spices for vegetables and fruits.

Customers cook on a dome-shaped Genghis Khan pan over a shichirin charcoal stove—Is there anything special about these pans?
We provide Nambu Tekki “IWACHU” pans: They are a traditional Japanese cast iron cookware crafted in the Iwate Prefecture. These pans are durable and can retain heat well, and the ridges make great grill marks and allow the marinade and fat to drain off. These pans are no longer common in Japan, so we want to keep using them so that our customers can experience the traditional Japanese method of grilling lamb.

Can you give us any tips for making Hokkaido’s most popular cuisine at home?
Pick raw mutton and try to avoid overcooking. You can be creative with your favourite store-bought Genghis Khan sauce by adding grated apple, sesame seeds, and grated garlic.

What other dishes do you recommend at the restaurant?
I would recommend Zangi (Kara-age fried chicken) and Jaga bata (Potato with butter)—they are all very popular. We slow cook the potato for a long time over a low heat in order to blend the butter into the potato. With the Zangi, we marinate the chicken in our Genghis Khan sauce, coat the marinated chicken with potato starch and then add rice flour and bread crumbs for a crispy, crunching touch.