You are at:Home»Food & Dining»Hokkaido Kitchen: An Dining with Shinichi Maeda 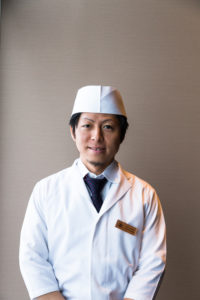 Shinichi Maeda, the owner/chef of An Dining as well as An Deli, was born in Fukagawa, Hokkaido and grew up helping his grandparents on their farm and watched his grandpa preparing fish that he caught. Their family kitchen was almost like his playground and cooking was all part of the fun.

Soon after he started primary school, he decided to learn judo. One day, around the age of 7, he decided to prepare fried rice for his judo buddies before practice. With this he learned the satisfaction of bringing joy to others through his cooking.

He decided to become a chef when he grew up, and was certain that cooking would be something he would enjoy for life. When he entered high school in Asahikawa, he really enjoyed Art class in his first year and his arts teacher suggested that he pursue a career in art and was granted a scholarship.

After high school he worked many different jobs until he finally graduated. Then he moved to Tokyo, with aspirations of becoming a singer in a band. He was welcomed in to a popular college band, however, he soon noticed that even high profile bands and musicians were struggling.

He reverted to his original goal which was to open his own restaurant. At age 24 he started an unpaid internship on weekends. He then quit his office job and sent his resume to many sushi restaurants in Ginza.

In those days, he focused on achieving his goals, and in March 2003, he finally completed his training period. He decided he was ready to go somewhere that he could study English and afford to live – Australia.

On the first day he arrived on the Gold Coast, he paid the language school tuition and a 4-week home stay program fee, then bought a bike for commuting. The rest of his money was well spent at a bar that night. On the following day, he started work at a sushi restaurant.

During Shinichi’s time on the Gold Coast he often met investors and business owners and one day of one of them asked him to supply food for a party planned for the next day. Shinichi spent 30 straight hours without sleep to make it happen, and it was worth it – it was a huge success!

The investor offered Shinichi an old, closed Italian restaurant in Noosa for him to renovate. With the help of local carpenters, he opened the fine-dining restaurant “Wasabi” one month later. By chance, the chief editor from Gourmet Traveller magazine showed up at the opening party and interviewed him. This restaurant was a great success; winning many awards before the restaurant was moved to a larger, waterfront venue.

Shortly after that he was headhunted by a beer company and he started a 200-seat Japanese restaurant “Sake” in Brisbane. This was quickly awarded “Best New Restaurant” and “Best Asian Restaurant”.

Four years later, after travelling through Europe he was offered an opportunity to open a restaurant in Niseko. He took that opportunity and opened the now hugely successful “An Dining”.

You work closely with the local town and farmers. Why is that?

That’s something I started during my time in Australia. I walk around the town and actually see the local produce and talk with locals. I like to create a wide social network with individuals, like fishermen and farmers, from all over Hokkaido. This year, I’ve even been in touch with producers in the Kyushu area.

What are you doing outside of work, in your free time?

More work, mostly. That’s the only time I can go visit and chat with producers. Well, maybe surfing, but only once a year. Our team is getting stronger each year, so I may be able to surf more often soon.

What are your thoughts on guests’ experiences in Niseko?

My main focus is providing a fine dining experience, but I’m also happy to serve guests coming to enjoy breakfast, lunch, and bento menu. I am trying my best to offer a variety of a la carte items for a more family-friendly environment.

This place is like a dream come true, so many people from so many different countries visit Niseko and I feel like traveling around the world without actually traveling. It’s a great place to be living with my family and experiencing all there is on offer here.

What are some things you would like to achieve?

I would like to connect even more and form a stronger relationship with the local neighbourhood. I’d like to be more involved in supporting nature, education, and the environment. Family is really important to me, so I try to spend as much time as I can with them. I strive to create a places and meals that are unique; that are nothing like others.

Salmon Dengaku will be served at An Dining as part of the Hokkaido Federation of Fisheries Cooperative Associations event “OISHII! Hokkaido Seafood Fair”. Try this recipe in your own kitchen or visit An Dining between 21st January and 12th February to enjoy this meal and get the most out of your local seafood experience!

Mix mirin, sake and sugar until sugar dissolved in a pot.
Bring liquid to the boil.
Add white miso and mix well.
Cook them over very low heat until it gets smooth and darker.

Cut salmon to 100g; keep skin on.
Season with salt and pepper.
Sautée salmon fillet with butter, skin side down until crisp.
Place salmon on the oven tray, skin side up, cover the skin with Den-miso.
Cook salmon in the oven for 3mins at 230 degrees Celsius.
Sautée spinach, shiitake and shimeji mushrooms together in the pan.
Place spinach, salmon, shiitake and shimeji mushrooms on the plate, garnish with shredded red cabbage.