You are at:Home»Features»Hooked on Hokkaido

What struck me first was how rapidly Hokkaido had shaken off the trappings of winter. Despite the ever-warmer temperatures, Niseko and Hirafu still retained their snow-jackets—the mountains were still covered with a thick base of snow, primed for a late-lasting season of Spring-skiing. Yet, here we were, mere minutes away from our winter home, and the blankets of white seemed like a distant memory.

It was early in the morning (much earlier than I had thought it would be,) and I was in the front-passenger seat of Alister’s car with six of my friends and colleagues, heading towards my first ever fishing experience. The port-town we would embark from was called Suttsu, about an hour and a half’s drive from the Grand Hirafu ski-resort, and I had plenty of time to nervously, but eagerly anticipate what was to come.

As my companions and I drove past forests and farmland, along the Shiribetsu River, and in and out of mountain tunnels, we excitedly discussed the trip ahead whilst enjoying the sights of a thawing Japanese landscape. The leaves of trees had become visible again, saturating the horizon with a healthy green wash, and the farmers had begun preparing their land for their first crops of Spring.

We were welcomed by our captain, and by his second-in-command, and introduced to the grand vessel that would take us on our voyage onto the Sea of Japan, in search of glory, fame, and lunch. I’m by no means an expert on boats, but I had a good feeling about this one. It wasn’t huge, (though by far the largest boat I have ever been on,) but was comfortable for today’s nine-man crew: To my untrained eye it had two helms, nine mounted fishing-rods, and a large storage rack for spare bags, nets, and snacks.

Our two guides set up all the fishing lines, and we eagerly chose our fishing rods, which were affixed around the sides of the boat: Richie and I rushed to the two rods furthest towards the stern, or the rear of the boat, hoping that our (entirely uneducated) guesses would pay off.

The captain began to hand out the life-jackets, though I wondered how likely it would be that we were going to need them, as I looked out onto the calm expanse. 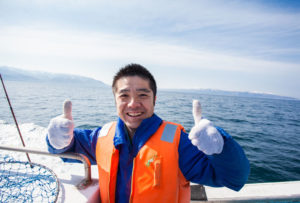 With a rumble, the diesel engine of our boat’s underbelly gurgled to life, dragging us out of port. We moved into the bay, tentatively at first, but once we had cleared harbour, the boat roared, picking up a surprising amount of speed as the land shrank behind us.

It really was the perfect day for fishing. Despite it being just past 8 a.m., the sun was warm, and shone proudly in a cloudless sky. The water was calm and steady as our boat vaulted over the waves, and we could see for miles.

Choosing the stern had paid dividends – it was an unbelievable view: Looking out behind us we could see the distant harbour we had left behind, as well as snow-covered mountains on either side of the bay. The incredible scale and contrast of those majestic, frozen mountains and the vast, sun-kissed sea took my breath away.

Our fishing rods were mounted on the side of the boat, and had been strung with five or six pieces of bait per line. We were using strange, bright-red squid pieces, which were skewered onto the small hooks that protruded out near the end of the main line. 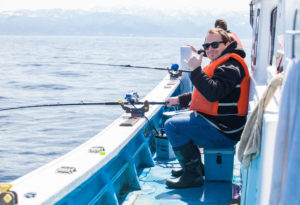 Our captain (who was determined to find us the best possible area for catching hundreds of fish to fuel our competitive spirit) navigated us from place to place, in search of that elusive sweet spot. Using an intimidating looking radar, depth sounder and a lot of nautical know-how, we would stop, cast our lines, and then move on once the fish had seem to have dispersed.

To cast our lines, we’d drop the attached weight into the water, and watch as the line plunged into the deep, causing the digital depth-guage to frantically count – ten metres… twenty metres… thirty… our lines stopped plummeting around the one-hundred mark, and then we’d wait, occasionally rocking and bobbing the rod to attract our prey.

As soon as we felt a tug on the line, (or more often than not- when our captain noticed a tugging on our lines!) we would switch on the electric reel and excitedly await either naked and bait-less hooks, or a string of flapping, dancing fish.

But this wasn’t just river or lake fishing where you only tried to catch one fish at a time, this was offshore fishing, where bigger hauls were better! We took this notion to heart – each of us loudly hoping that we’d catch more fish than whoever was closest (but still occasionally snagged their lines)!

Though a few new fishermen were born that day, not all fishermen were created equal – the difference between Tadashi’s deft fishing motion and one of the newbies’ was obvious, and Ben’s stoic patience definitely paid off, as they both reeled in fish after fish. Moose and Alister contributed some beautiful big fish for the haul, as did Rich and Tim. (Although Tim kept catching a strange, bulbous-eyed fish that the captain advised we throw back to sea…) The seagulls that trailed our boat weren’t quite as picky as us, so they eagerly devoured any fish that didn’t quite meet our standards!

Much to my (well-disguised) surprise, I managed to catch many more fish than a beginner like me deserved – but after such a fantastic day on the water, our competitive banter had been long forgotten and we all looked forward to tasting the delicious rewards of our labour.

When we headed back to harbour, the temperature had dropped, and the winds had risen, whipping up the waves around us. The power of the sea was palpable as we crashed through frothing waves. Our entire crew felt like grizzled veterans, sea-spray soaking us as we hung on tight, the boat’s rails keeping us aboard.

Once we got back to port, our captain gave us the gift of an octopus to add to our collection of over thirty fish. When he presented it to us, he demonstrated how fisherman prepared octopi – with a morbid curiosity, we looked on as he skilfully prepared the octopus with his blade – it was so fresh, we could still see it moving around in our fish-filled chest when were about to depart! Unlike the octopus, we couldn’t stick around – thanking our guides and teachers, we said our farewells, and headed home, eager to feast.

Ben, Tadashi and Alister prepped and cooked the flat head fish we caught, over a hot-coal barbecue, wrapped in foil and baked with lemon slices and herbs, and the octopus was pan-seared and added to Tadashi’s delicious octopus pasta-dish. What had started as a small fishing trip lunch had turned into a full-blown barbecue-dinner, with food, drinks and laughter all round. Although many more friends and co-workers were lured in by the smoky promise of a delicious fish barbecue than we expected, not a single person left without a hearty meal in their stomach and a smile on their face.