NOTICE: The following article was written by highly trained mountain guides. Back country skiing should only be done under professional supervision and with safety gear.

Teddy and I arrived in Niseko the same week in 2008, in the 9 winters since then we have skied a lot of powder together, mostly around the Niseko area. This spring we decided to take a road trip to some of the lesser known mountains of Hokkaido, a few of them we had skied before, some of them we knew people who had skied there, and others we just took a chance on. After a busy season of guiding and teaching, we blocked off a week, loaded up a van, and hit the road. The first stop was Asahidake, central Hokkaido, the forecast was calling for some snow and we both know the mountain well. Asahidake is Hokkaido’s highest peak, and it has a single cable car that runs every 20 minutes. Skiing straight off the lift is great, but a little short on vertical, if you bring touring gear you can access much more for just a little extra effort. The first day was grey, but with a nice layer of dry powder we had a good time. The second day was when things really got good, in the morning we weren’t too optimistic, as there wasn’t a tonne of snow on the car, but some flurries during the day kept topping things up, and with hardly anyone on the mountain it seemed like every run just got better. 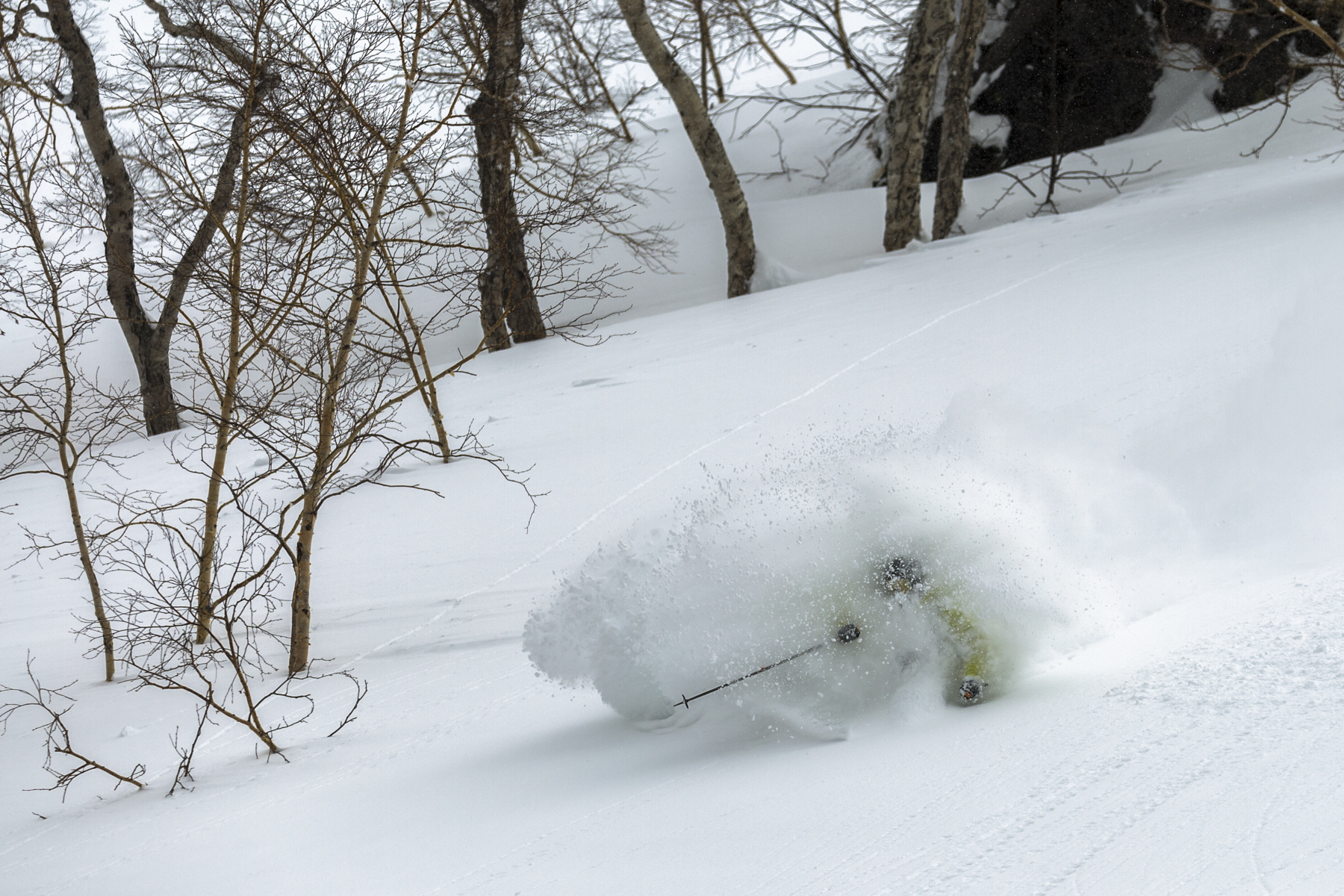 With sun in the forecast we headed south to Tokachidake, an area with no lifts but endless touring opportunities. We stayed in a run down onsen hotel, with questionable décor and food, but amazing views, we woke up looking staight out our window at the line we wanted to ski, a chute running down the western flank of Mt Furano. After a warm up line in the sun, we picked our way up the ridge, it was icy and windy, never a fun combination for skinning, but when we dropped into the chute the snow was fantastic, the only downside being that a group approaching from another angle had beaten us to it by 20 minutes! 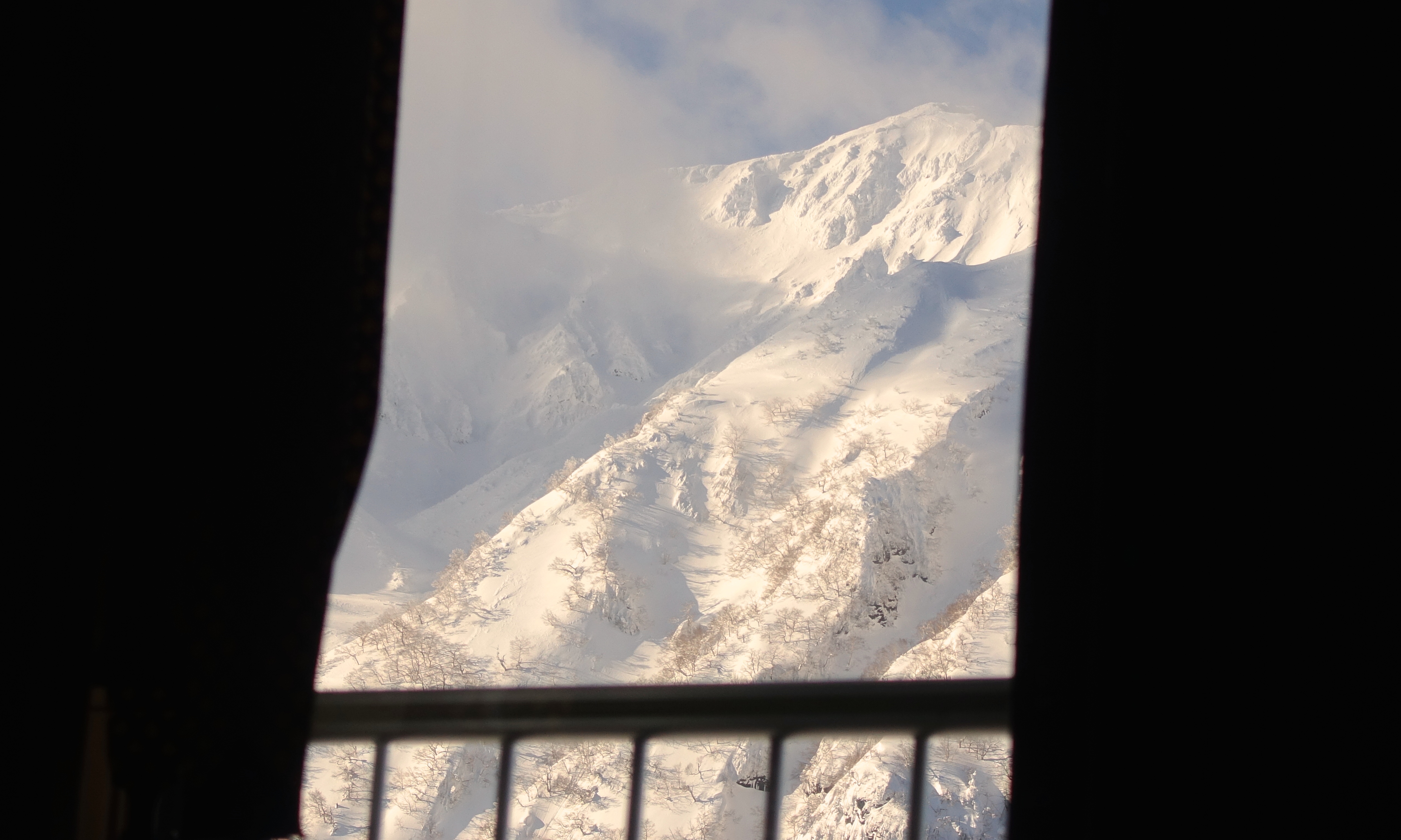 We had plans to camp out at a free onsen nearby, but checking the forecast we saw that a weather window for Mt Rishiri had moved forward, so we put our foot down and pushed north. Mt Rishiri is a 1800m volcano that rises straight out of the sea off the NW coast of Hokkaido, not a particularly hospitable place at the best of times. So as it looked like clear skis and manageable winds, we had to go. Arriving into Wakkanai in the evening we had our daily onsen, and a sushi dinner before resting up for the early ferry the next morning. Rishiri from the ferry
Photo: James

Once on the ferry we initially tucked into our conbini (Japanese convenience market) breakfasts and napped, then before too long spent the rest of the journey staring at the cone of jagged perfection towering out of the sea in front of us. The sky is a deep blue and the peak becomes increasingly intimidating as we approach, I am simultaneously dreaming of standing on the peak and dreading the hike ahead of us. We pick a trail head and start walking, at this stage we tell ourselves that we are just going to scope it out. As we steadily trudge up the mountain, at each false summit we say that we’ll get to the next one then turn around, until we get to the penultimate peak and realise that we have gone too far to turn around now. The views on the final ascent are hallucinatory, steep ridges and towers falling away to the sea in all directions. The terrain here is unbelievable, if only it wasn’t so hard to get to and didn’t have such famously bad weather I would stay here all winter. 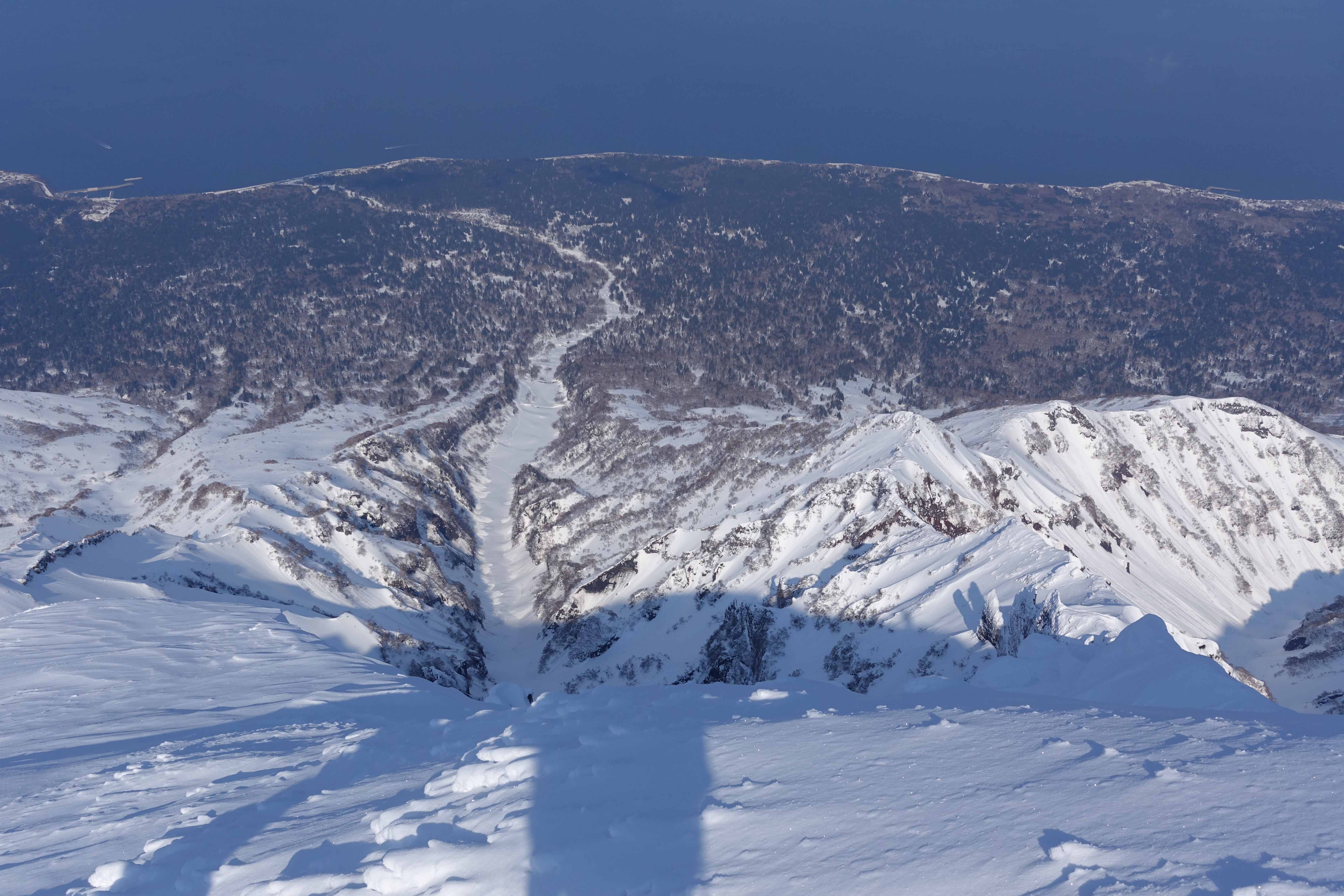 The summit is an amazing feeling, euphoria mixed with exhaustion and disbelief that we actually just got off a ferry and climbed to the top of a peak we had been thinking about for so long. The descent isn’t anything special, windblown powder at the top, then crusty transformed snow at the bottom, but the day overall is one of my all time Japanese highlights. 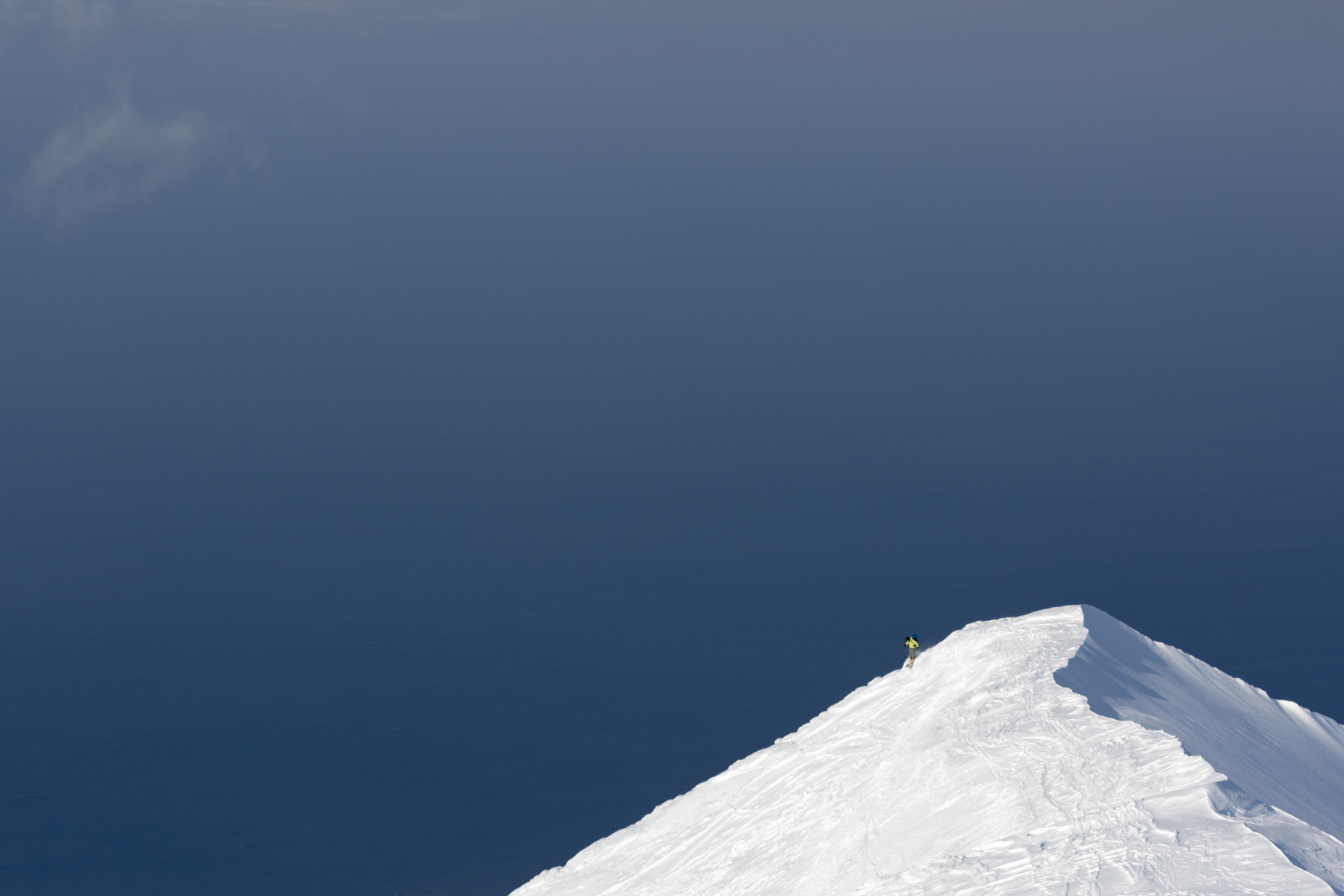 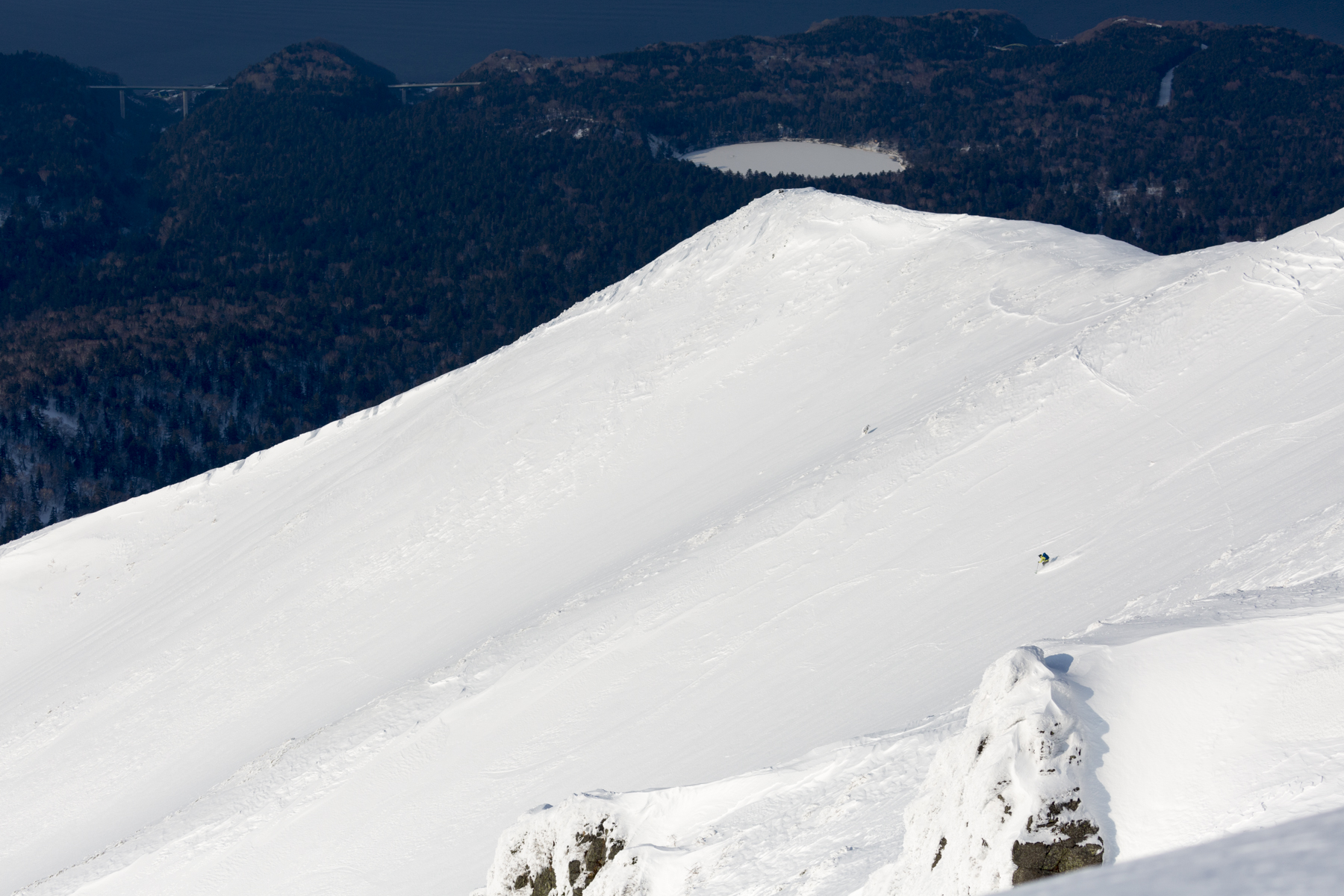 We think about getting the evening ferry right back to Wakkanai, but figure we may as well see a little of Rishiri, it turns out that the town in Rishiri is as good as dead in the winter and we struggle to find anywhere open to stay or to eat. So, where next, back to Central Hokkaido? That would be the obvious choice, but for a few years I have looked at some peaks on the eastern side of Hokkaido, we have never heard of anyone skiing there, but we begin the 8 hour journey down the coast anyway. The peak I have in mind is called Mt Rausu, part of the rugged Shiretoko peninsula, a UNESCO heritage site, famous for it’s population of brown bears, and for being one of the southernmost places sea ice forms (in the northern hemisphere). 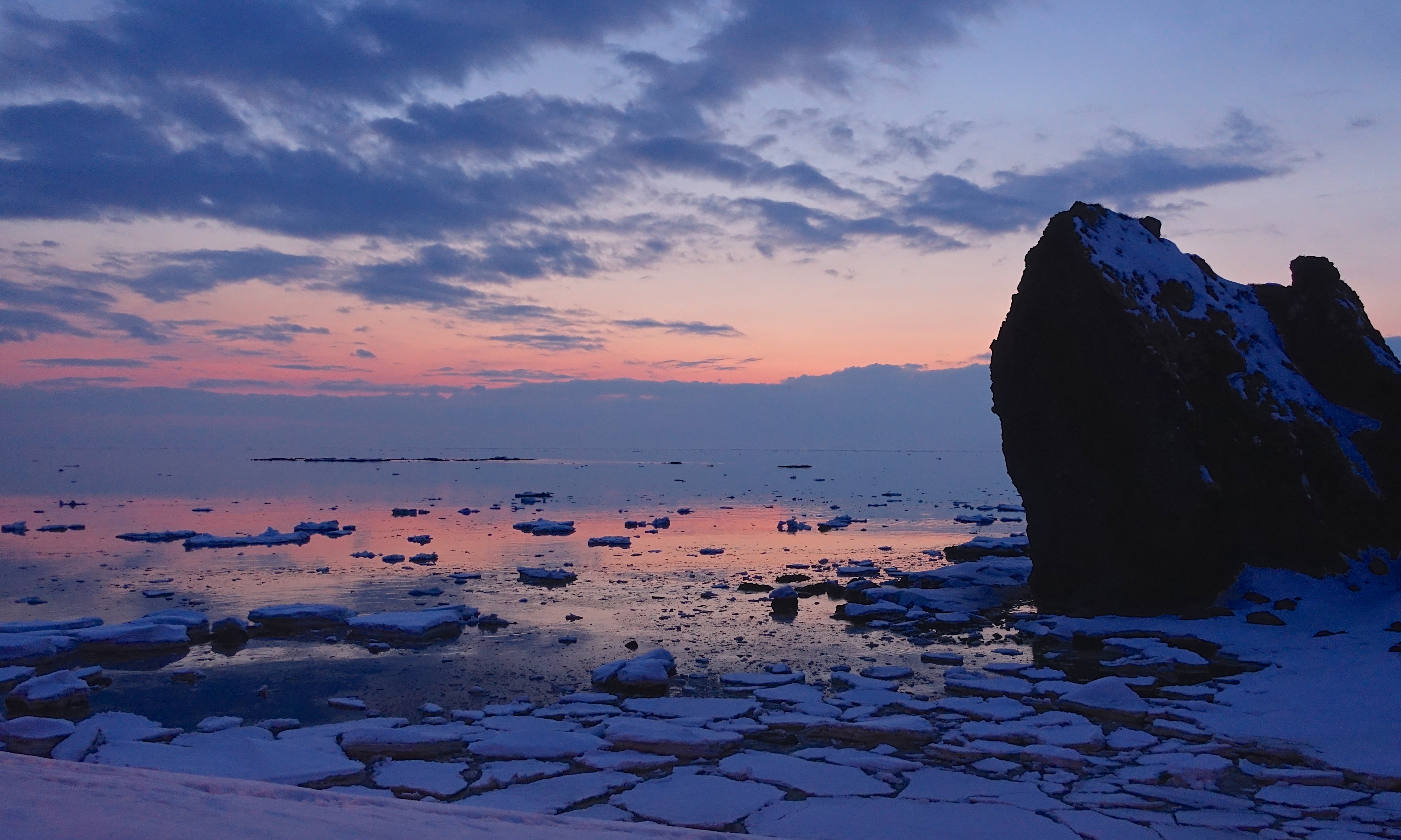 Our mission to Mt Rausu goes awry quickly, as the road we planned on accessing the mountain by is shut, leaving us with a long walk. We trudge along the road, tapping our poles occasionally to ward off bears, and just as we approach the base of the mountain, a storm rolls in. As we pole along our skin track back to the van we wonder if coming East was really a good idea. 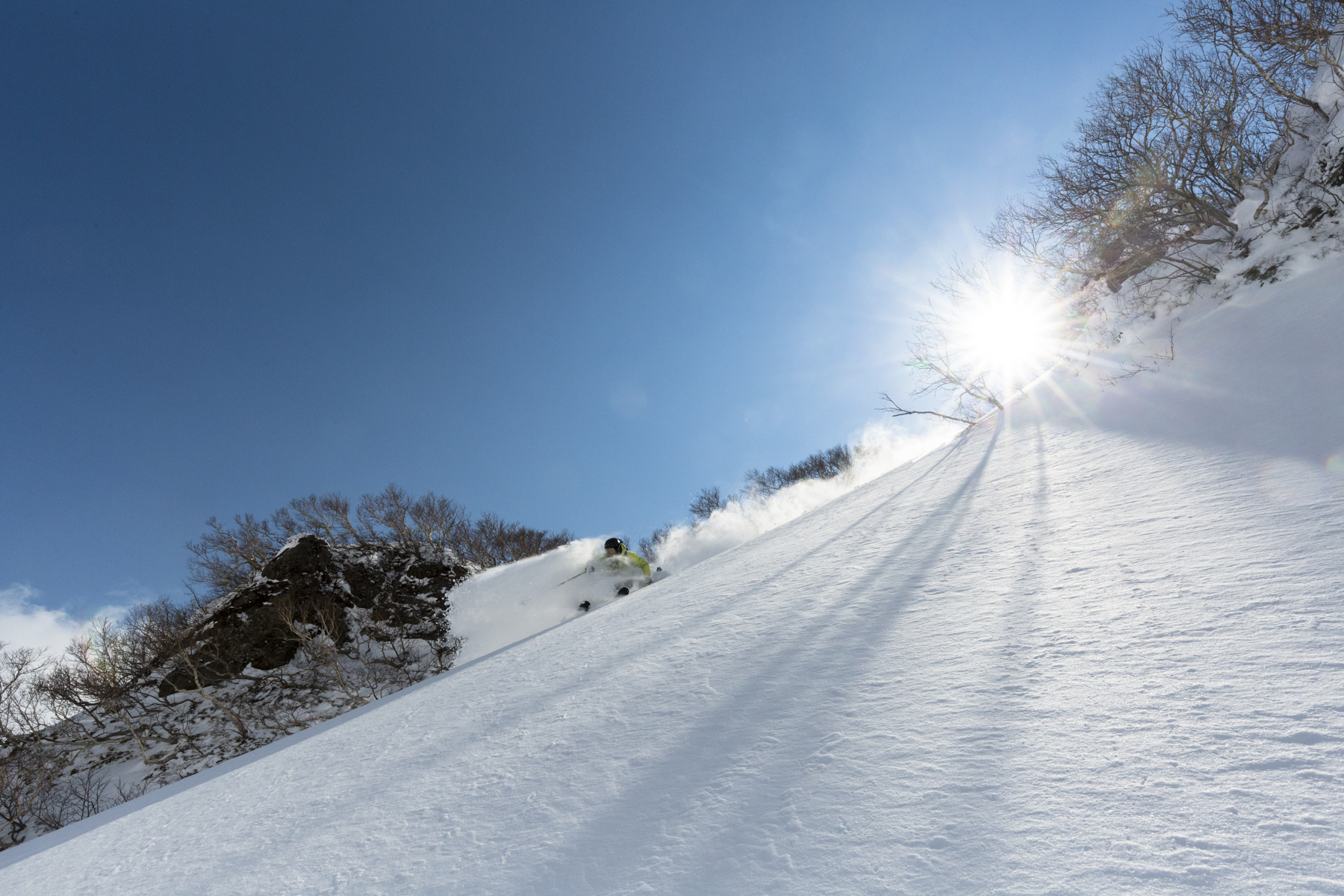 After chatting to a local guide, we find a new objective for the next day, Mt Shari, one of the more inland peaks of Shiretoko. After a long walk on the flat in some fog, we began to climb and the clouds parted, giving us spectacular views of the peninsula, sea and Kunashiri island. On the descent, the south face was a mixture of slush and ice, but the north facing ridges held some great powder snow. We squeezed in a quick second run, and got on the road back to Hirafu, stoked that we took a chance on a new area, we’ll be back!

Teddy and James are part of the Hokkaido Collective, a group of Niseko’s top guides and instructors. If you would like to take your own adventure around Hokkaido, please get in touch.